Early morning we set off to Kedarnath. It took about 2- 3 hours to reach Gouri kund, the base camp from where the trek starts. No vehicles can go beyond this point as there are no proper roads. Gouri kund has hot springs & many were taking bath in it. It was surprising to see hot springs in that place. Kedarnath is 14 kms from Gouri kund and one has to rely on pony, palki or baskets which are carried by pahadis (People living on hilly terrain) on their backs. Many choose to go on foot. We hired 2 ponies, for my SIL and me, a palki for MIL and my husband and BIL decided to go on foot. Walking sticks were available for a nominal rent.

The air was cool and pollution free. Everything was perfectly set and I mounted the horse along with my son. My sonny was comfortable but when the pony started moving my head reeled and I screamed. My throat went dry and I wanted to jump down. It took a while for me to settle down and after a while we set off.

Soon I became comfortable and started enjoying the upward trek taking in all the pristine beauty of nature. The path was narrow and at times the pony jumped to avoid big rocks and my heart came to my mouth. My son was enjoying the ride. Little boys of 7-8 years were manning the ponies and mine was also managed by a small boy. They are very casual in managing the ponies as they are very familiar with the surroundings. At one point he just left the pony and it was moving on its own. While taking a turn it went close to the edge of the cliff and stood there. I thought that was the end of my journey.


We decided to skip lunch and took rest & had tea in the afternoon. My SIL was with me but I could not find other members. The saddle was biting into my flesh and I was finding it difficult to move my legs with my son in front so I shifted him in MIL’s Palki when I met her. We reached Kedarnath in 5 hrs. My hubby and brother in law took about 9 hrs and for last 1 km. which was quite steep; they too used ponies as it was getting dark. But till 8 p.m day light was there which was surprising.

We got accommodation again in Kali kambli (it is run by Rajasthanis) and we got into something like a hut. Inside was dark as there was no electricity, as during the snow fall previously the electricity had been switched off and we were one of the early pilgrims that season & they informed us that it will take another week to re start the supply. We were not sure how that room looked. Due to tiredness, MIL & SIL called it a day and got into the bed. They decided to visit the temple the next day. Outside our room it was full of snow which was slippery as it had started melting.

Then we went to the temple and had Darshan of Kedarnath. At night we were served hot rotis but by the time it reached our hands it turned cold. A sigree (A stove like thing in which burning coal is kept) was kept in the room for keeping us warm and we switched it off when we went to sleep as it is harmful to keep burning coal in a closed room.

Next day we went to the temple performed pooja and we could actually touch the Siva lingam which is in the form of a pyramid. Here we can perform our poojas and all that is required for the same is available at the entrance itself.

Our Team with Kedar Nath temple in the background

Morning light gave us a clear picture of the surroundings. The Scenery was of the snow covered Himalayas was breath taking (even other wise one gets breathless as the oxygen in the high altitude is low) and we could see only snow covered mountains all around. I felt we had reached the heaven finally. 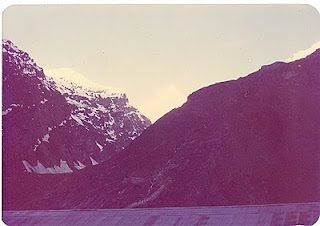 Accommodation is not a problem in Kedar Nath but it is wise to plan well before taking the journey. There are many dharamsalas and hotels around the temple.

After the pooja we started our journey downwards. This time both men in our team, also used ponies to reach the base fast as we wanted to leave for Badrinath on the same day.

To be continued…
Posted by chitra at 7:02 PM