A pilgrimage to this temple of Lord Mallikarjuna  at Srisailam hill is considered to be  equal to a trip to holy Kailash.This temple is set in Nallamalai forests in picturesque surroundings with river Krishna flowing near by.
The temple complex is  unique as it houses  Jyothirlinga  as well as  a Shakthipeeta. Here in this temple ,devotees can offer pujas directly to Lord Mallikarjuna but advance booking is required and one has to follow specific dress code (wearing Veshti and Angavastra) to enter the sanctum sanctorum. The Vimana of the temple is covered with gold plates and is in the shape of a pyramid. The Lord's consort Braharambha is one of the 18 Mahasakthis and it is believed that neck portion of Sathi Devi fell here after things that followed  Daksha yagna . There are many shrines around the temple complex  for Ganesha, Ardhanareeshwara, Kalabhairava, Veerabhadra . There's also a beautiful Nandimandapa here.
Barely 3 Kms away from the temple is the shrine of Sakshi Ganapati. Pilgrims do not miss paying obeisance to this Ganesha and it is believed Lord here keeps an account of pilgrims visiting Srisailam temple . The idol here holds a book in left hand and a pen in the right.
The roads here are excellent and it passes through Tiger Reserve. the roads remains closed from 9 Pm to 6 Am. Those travelling to temple must make a note of the same.
A detailed description can  be found in the link provided.
Mobile/ cameras are not allowed in this temple and there  are locker facilities to store the same.
check my earlier Jyothirlinga posts on 1. Ramanathaswamy temple Rameshwaram, 2.Somnath temple, Gujarat, 3.Bhimashankar near Pune,4.Mahakaleshwar, Ujjain, 5.Nageshwara Jyothirlingam Dwarka
a few pictures from  Sakshi Ganapati are shared below.
check this link too for temple gallery pictures 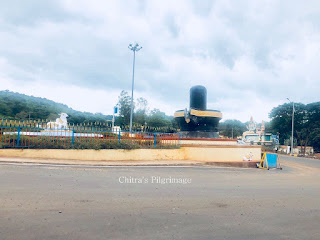 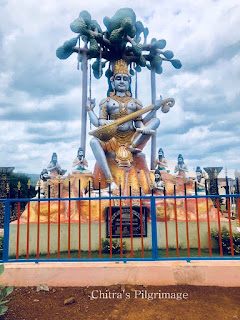 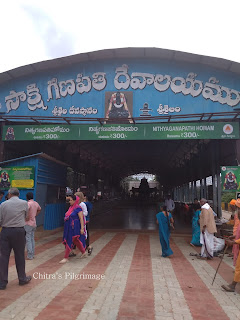 Mahakaleshwar , Lord Shiva's  temple is situated in ancient Ujjain city . It is one among the 12 Jyothirlingas ; the most sacred abodes of Shiva. The Shivalinga here is a swamybhu and is situated near Kshipra river.
As per Shiva Purana once Brahma and Vishnu had an argument to find who among them was the supreme one. Lord Shiva in order to test them, became a column of light and asked them to find the beginning and end of the  light. Vishnu gave up as he could not see end of the  column of light and he conceded defeat but Brahma lied and Shiva was furious with Him. Shiva cursed  Brahma that He won't be worshipped on earth but Vishnu would be worshipped till the end of all Yugas.
The temple of Mahakal attracts huge crowd and one can find long lines of devotees waiting to catch a glimpse of God. The Bhasmarti worship is very famous here which is conducted every morning at 4 am.  The aarti rituals are spectacular which goes on for about  2 hours and devotees can book tickets online for the same. Bhasmarti is adorning Mahakaleshwar with ash followed by Alankara and worshipping with  Maha aarti. Do watch the You tube video in the link by Health Vatika to understand and get a feel of the aarti.
Electronic gadgets and bags are not allowed inside the temple. Temple administration has made locker facilities for safe keep of the belongings of devotees.
Check here my earlier posts on Jyothirlings temples of Ramanathaswamy - Rameshwaram
Somnath temple- Gujarat
No photos to share on Mahakaleshwar temple.
Posted by chitra at 11:28 AM 1 comment: