Our stay in Chamoli - an unforgettable experience

The journey from Kedar was pretty long and we reached Chamoli district which is located in the Garhwal Himalayas of Uttaranchal around 6 P.M.The district is largely inhabited by Tibetans.

We were advised not to travel as we had to cross the forests to reach Gopeshwar which was only about 25-35 kms. With our super heating car it would have taken at least another two hours if we were to travel there for the night stay. We heard that there was a government tourist bungalow and when we decided to camp for the night, well it indeed turned out to be a camp really as we found the only tourist bungalow at Chamoli was fully occupied. We were little anxious as it was getting dark. A man on the road suggested that some accommodation could be available in a small village little ahead. When we reached there what we found were some tin shacks and a family was coming out nodding their heads unhappily. We learnt that they were unhappy with the accommodation and rejected the same .So, when we reached the owner; he readily offered us the rooms which we gladly accepted because of the predicament we were in.

We found the owner to be very kind and he offered us hot coffee which was refreshing after a long drive but for small halt for lunch in between. We felt it was like a heaven for us. For dinner his family prepared nice phulkas and bindi masala which was delicious, which even now we recall quite often. We posed with his daughter and took snaps. As we were very tired, we straight away hit the bed. No sooner had we done so, it started pouring heavily and the tin roof made it a nice jazz and we slept blissfully. There were only 2-3 cots in the room and bed was hard and the quilt was cold but at that time it felt like five star comfort. Next day when we started early for the Badri journey we saw the family which had rejected the accommodation the previous night, standing under a shelter beside their car. They too were scared to travel in the night through the forest and probably took shelter there. We really wondered how horrible it would have been for them in the miserable cold and wet night which really would have been ours but for their rejection of that shack. Probably this is what people mean when they say the fortune favours the brave. 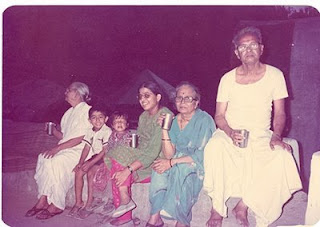 
From Chamoli, 2 1/2 km. up through a trek is Tunganath temple, it is one among the Panch Kedar temples, but we skipped that as it was not in our itinerary and nobody was in a mood to climb for a 5 km. up and down trek.

As soon as we left Chamoli we were into the forest .The journey was pleasing for the eyes as there was greenery and colorful wild flowers all around and we could see lot of birds and small animals crossing our path at regular intervals. We reached Gopeswar in a couple of hours and we found that was the largest town till then and decided to have our break fast there. After a halt of an hour relishing on Aloo parottas with Dahi and pickles we set forth towards Badri “The Valley of Gods.”


The next halt was Joshi Math which was around 30-40 kms. drive and it took us a couple of hours. We had to wait for our turn for the drive to Badri as only one way traffic was between Joshi math and Badri, the roads being very narrow and it could take one vehicle to pass at a time in one direction. No over taking was allowed and in many places molten streams of snow crossed the roads making the journey even slower. We found on one side the slippery mountain of melting snow and on the other side it was a 200 meters drop into the ravines below. The journey was scary and exciting and we got so absorbed in the surroundings that we never felt we had spent the next 2 hours as we approached Badri.

It was nice reading this experience of yours, CM ... I especially liked the photo. You look so carefree in the picture ... Lovely!!

thanks Ashwini. We had one more photo of that chamoli village and that we sent it to our host in chamoli. It was indeed a lovely trip

It is a great wok, Chitra. A good information and guide to all planning for a pilgrimage. your choice pick of words and language adds spice to your blog. Keep it up. Our Best Wishes to you.
You will not be missing God's Blessings, even if you don't ask for it,because of the daily upasana you are doing by writing about the places of His/Her various abodes and highlighting it to many of His/Her devotees.

Thank you so much Bavaji
I think this is a great opportunity God has blessed me with to visit His temples and to share with all.