Sriramachandra Swamy temple at Bhadrachalam is situated on the banks of river Godavari and is known as Dakshina Ayodhya.
The temple is situated on a small hillock and a few  steps would lead one to the temple.
The sanctum here has beautiful granite idols of Sri Rama with consort Sita sitting in his lap with  Lakshmana  standing nearby with an arrow in his hand.


The legend is that Sri Rama, Sita and Lakshmana spent their days here in Dandaka forest during their exile . Rama's grace turned a  hillock into a human form called Bhadra who was a great devotee of Rama and he spent his life chanting Tarak mantra. He wanted Rama to reside there on his head but as  Rama was in search of Sita as she was abducted by Ravana ,he promised to return after finding her; a promise which was never fulfilled in his life time.


As Bhadra's penance continued, Lord Vishnu manifested to bless his ardent devotee as Vaikunta Rama with  conch, disc, bow and  arrow in His four hands forgetting that Rama was a mortal being.


To give salvation to Bhadra ,he was again turned into hillock and as per his wish Lord decided to reside at the hillock. The hill also came to be known as  Bhadradri (bhadrachalam).


This temple was constructed by Bhakta Ramdas in 1674 AD.
More details here.


Lift facility is available for physically challenged and very old  citizens.
Paid darshan tickets are available inside the temple complex which allows devotees to go closer to the sanctum.
Mobile phones are not allowed inside the temple and there is a cloak room for safe keep of phones for a small fee of  Rs 5.
Bhadrachalam road is the nearest rail head and one can travel by bus or cab to reach Bhadrachalam temple town which takes about a 45 minutes by road.
Only Chatrams and budget hotels are available in the temple town. 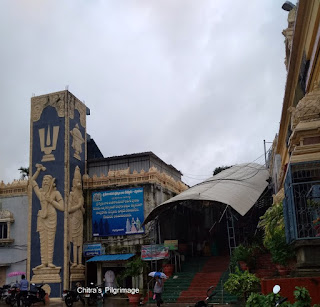 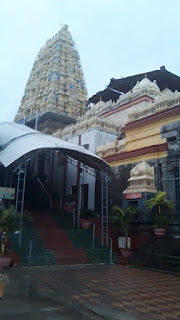