On the Occasion  of Maha Shivarathri, here's a post on Lord Shiva.

Just back from a Pilgrimage and it was a time well spent soul searching, refreshing the mind and body, understanding the significance of various  pilgrimage places and how it relates to us. It  is decided by the Almighty that we must be present in such and such places at such and such times and here I was at Somnath . He commanded, I just obeyed. Usually temple Somnath remains crowded but the  Lord made sure it wouldn't be so and we could be in the temple as long as we could wish for.
I would say these experiences in life help one to  grow and evolve into better human beings.

Somnath is a small town, its  name derived from the presiding deity of the temple. This is also  known as Adi Linga , the first among the 12 Jyothirlingas.

The temple stands tall , grandeur incomparable  on the shore of the Arabian sea at  Prabhas Patan near Veraval , Gujarat. This temple has excellent marble work and ornamentation on walls, ceilings and spires.

The Lingam of Somanth is quite huge, radiant and is  decorated well with brightly coloured flowers  resplendent with shimmering  silk . Head bows , hands fold in prayer and mind focuses on Lord in sanctum without our knowledge. Such is power of the deity. The sanctum of Shiva is brightly lit, it adds to the ambience . Behind the Lingam is Goddess Parvati and on either  sides Lord Kartikeya and Ganesha.
There are also niches with Gods and Goddesses just outside the sanctum.

Evening Aarti is an important and colourful ritual and should not be missed at any cost. It will also let one surf on a great spiritual journey as the atmosphere inside is charged with divine music and cling and clang of bells. External world totally forgotten and one feels the bliss. Great experience.

Outside the temple, the  parambulatory path extends up to the sea and is built like a terrace.  There's an arrow on a pillar known as Baan Stambh  which points to South pole indicating there is no land area between these two .  Interesting right? Note these when you visit.More here and here

There is  also a smaller temple just outside the Main temple known as Old Somanth . Here one can worship the Lingam directly by bathing the deity with milk, water, or just flowers all of which is available just outside the temple.
It is also believed that Krishna worshipped Lord Shiva here before embarking on His Last journey of Neej Dham Yatra.
The last picture is from Balka Teerth , the place where Krishna was hit by a arrow when he was resting under a tree.

Important things to remember during the visit

No electronic gadgets and devices are allowed inside the temple, Leather belts are also a taboo here.
Free and safe locker facilities are available here.  Security screening is done at a couple of points as it is mandatory before one enters the temple. 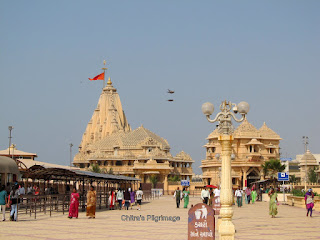 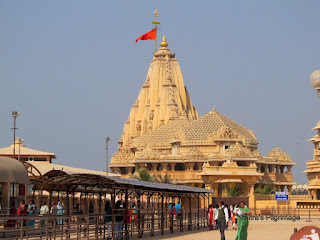 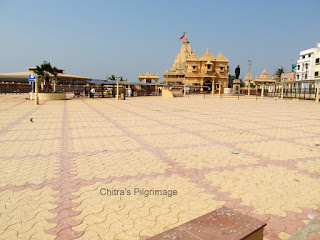 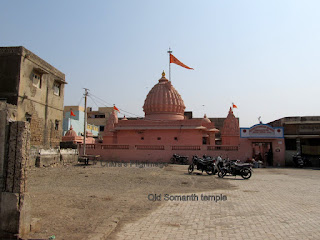 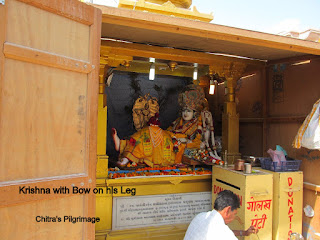 Thanks for the wonderful description of this historic temple. Happy Mahasivaratri.

Thanks a lot SG. Happy Maha Shivarathri to you also

Thank you very much Sridharan.

Thank you for sharing your journey of pilgrimage with us.

You have brought out the salient features wonderfully in your write up and the pictures.Makes me yearn to visit the place.
Am awaiting eagerly for your posts on other temples and places visited by you.

Thanks a lot Tracy. Had a wonderful pilgrimage

Thanks a lot Kp. Will be posting one by one.

Thanks a lot Kp. Will be posting one by one.

Thank you for the informative blog of Somnath temple. It is a pilgrimage near Veraval,which was founded in 13th or 14th century by Rao Veravalji Vadher, a Rajput.I would like to add that once a fortified port town of the royal family of Junagadh, there are still many places to visit in Veraval which still bears some remnants of the old Nawabi heritage. Since it enjoyes a long coastline, lined with beaches, it is an ideal tourist destination.

Lovely post on this great temple! Nice pictures too!