Trivandrum, the State capital of Kerala is known as Thiru Anantha puri, it takes its name from Lord Anantha Padmanabha- Lord Vishnu ,the presiding deity of the famous temple there. Vishnu is known as Anantha Padmananbha as he is reclining here on serpent Anantha and there is a lotus emerging from his naabhi( Navel) with Brahma sitting inside. This idol is around 23 feet long and one has to have a darshan of this huge idol through  three dwaras( doors) the head portion , the abdomen and the Legs. The idol is made of a special combination of herbs and is centuries old.

This temple  buzzes with a steady stream of pilgrims. This temple was constructed by the erstwhile rulers of Travancore .  This temple was very much in news recently when treasure worth millions stacked away in the cellars were discovered .   A few cellars remains unopened. Presently  the temple is heavily guarded with a posse of  police personnel round the clock and the security check up has been beefed up. Pilgrims are not allowed to carry mobile phones and cameras.

The temple has a huge image of Hanuman statue at the entrance.Everything in this temple is divine, be it a blade of grass or a grain of sand.

There are also shrines for Kodhanda Rama and Vishwaksenar just outside sanctum of Lord Padmanabha.
The sprawling temple grounds also houses two more shrines one of Lord Krishna and other for Sasthavu.
The temple tower is modelled like we see in Tamil nadu.

There is a  museum outside the temple and an old clock with goats hitting a  demon/butcher every time the clock chimes  is worth watching.

This temple attracts lot of tourists from all over the world.

Dress code- Only Dhoti and Angavastram for men. Pants and Chudidhars are not allowed.
There is a stall outside the temple for lending dhotis.
A temple worth visiting.
How to reach- Being the State capital of Kerala the city is well coneected by road, rail and air.
There are some  more temple in the vicinity which I will be posting shortly.
A few pictures I could gather. 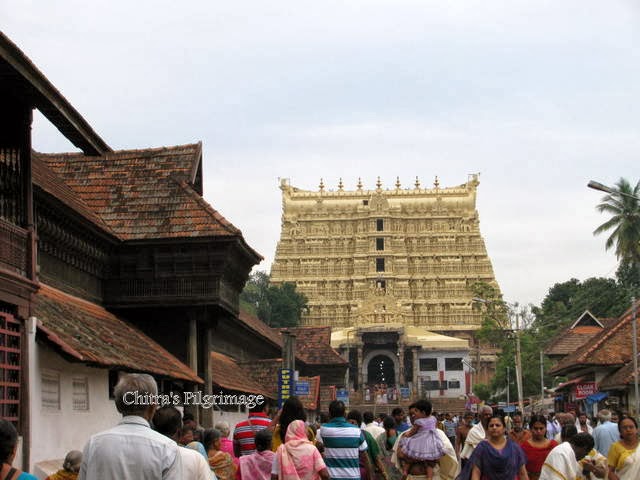 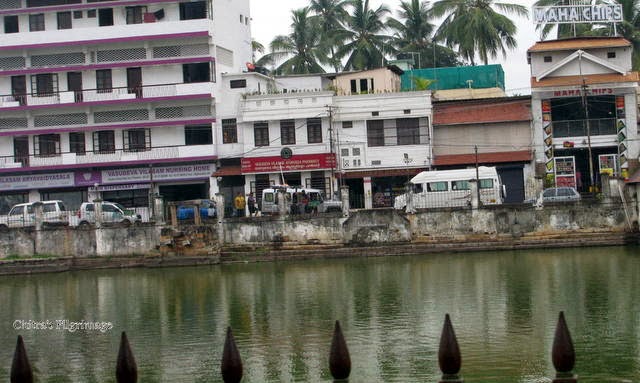 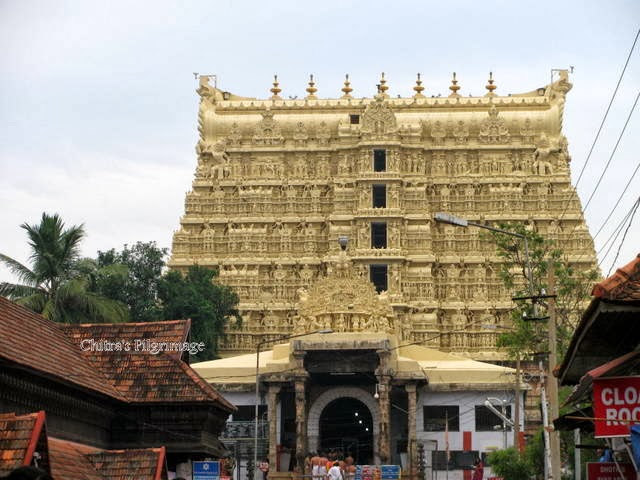 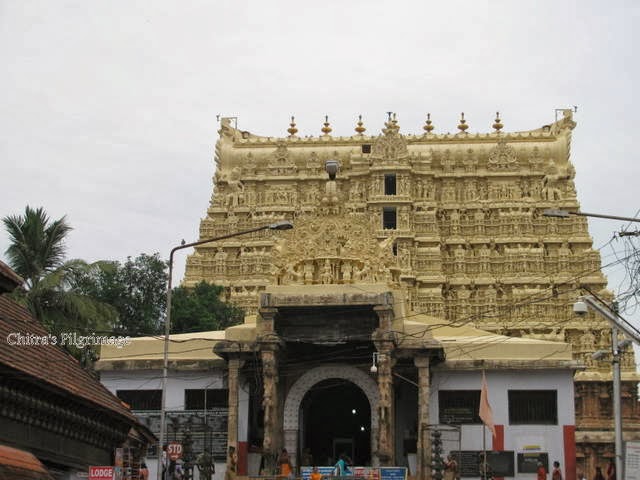 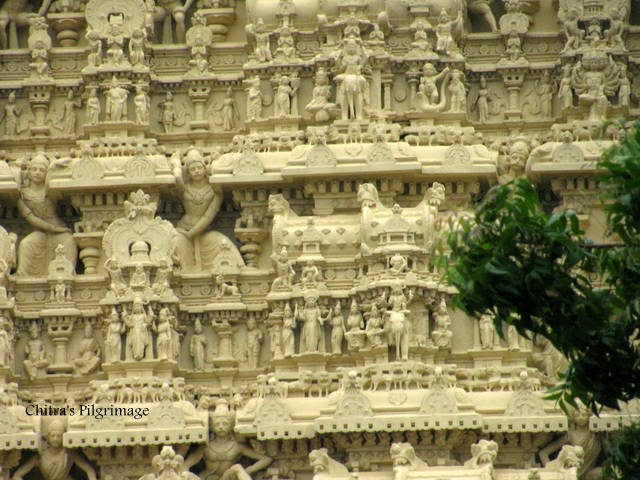 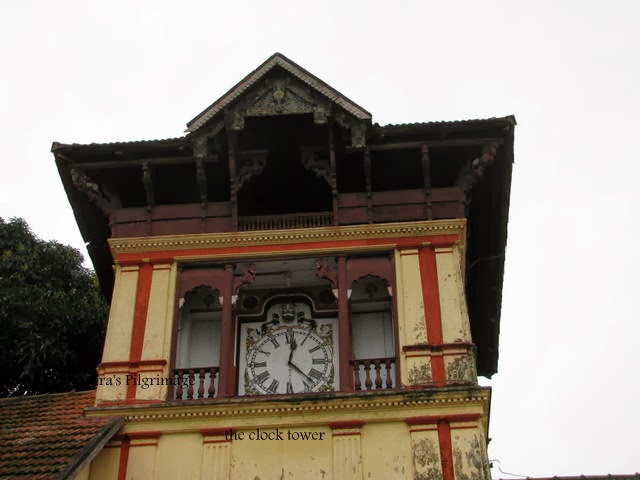 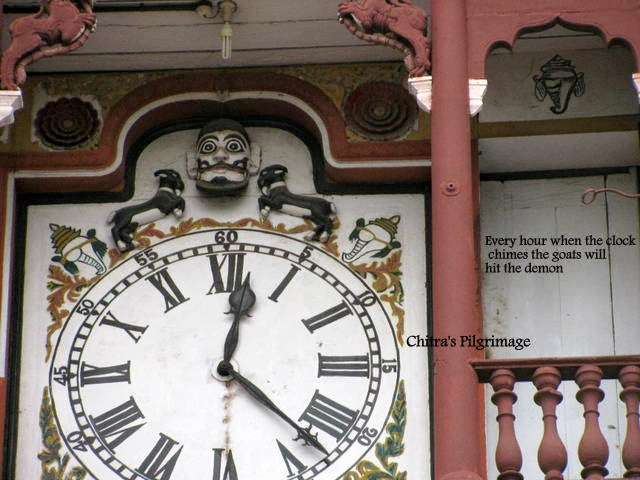 I had been there decades back.That was the time when the Maharaja visited the temple.We were made to wait till he left after his morning darsan.A well kept temple.Like Srirangam,,the Lord is in reclining position.Kerala temples are calm,clean and peaceful conducive to prayer.

Thanks a lot Niranjan.

Well said. KP. the king visits the temple regularly . he considers himself as the servant of Lord. I had visited this temple in March 2013

The details in the carvings amaze me!
Have a great week, my friend!
:-)
Traci

Thanks for the nice narration and photos. Last year we went to Kanyakumari and Suseendram. But missed Thiruvananthapuram. Will visit next time. Is the gold on display? I mean huge amount of gold found in the rooms.

SG,
The treasure was never on display only a few pictures were released which showed some golden idols and rare coins. Now Lord Padmanabha it seems has become richer than Lrd Balaji -Tirumala:)
You mst visit this temple. Really beautiful atmosphere.

Ramkrishnan,
I heard the news from you first. I post about a temple related to royal family and Lo..there is some news. The servant of God ultimately reached the Tiruvadi of Lord.RIP

Ashok, I know, I am surprised..

Hey Chitra, it's been a while! This temple is so amazing in all it's golden beauty, must be quite a sight! I hope you have a happy ending to your year and send you blessings!

Loving the thought of the clock with goats hitting a demon/butcher. Great post as always, its good to have you back.

Yes Martina, missed all of you a lot. I hope you too have a beautiful year ahead.

Thanks PW . I have visited that temple many times. this pics are from my recent trip.

Nice write-up and pics Chitra..I visited this temple long back..Felt quite sad that cameras are not allowed inside.. a marvelous temple..