Sowmya Narayana Perumal temple in Tirukoshtiyur is in Sivagangai district and is 10 Kms from Tirupathur town, on Madurai Karaikudi road.  This is one of the 108 divyadeshams of Vishnu and I would say this was the most adventurous trip to a temple I ever undertook as I climbed the Vimanam ( tower) of the temple.

The temple is situated in a serene village and  a huge tower welcomes us inside the temple. The uniqueness of this temple is, there are 3 tiers  in the main Vimanam above the sanctum and and each tier houses a deity, the main one being on the first floor.

This   is a rock cut temple and here we can see the blend of Vaishanavism and Saivism .At the entrance there is a separate shrine for Siva with Nandi mandapam in front.  As we enter the Perumal temple,  there is a small shrine for Vinayagar , On the ground floor there is a beautifully carved statue of dancing Krishna  with Rukmani and Satyabhama.  There are many idols of Azhwars (Vaishnavite saints)  in this prakaram.  Turning left, climbing a few steps one would reach the Sowmya Narayana Perumal's sanctum. The Moolavar ( the main deity) is Vishnu in Anantha Sayanam known as Ugramellanaiyan and along with him are Boodevi and Sreedevi. The Utsavar is Sowmaya Narayana Perumal with his consorts and there are also idols of dancing Krishna, Chakrathazhwar, Ramanujar and Nambigal. On the ground floor is the shrine of  the Thayar , known here as Thirumamagal .  From the Thayar sannidhi there are a fleet of steps which  takes one  to the top of the Vimanam .

A trip up the vimanam is adventurous , scary and cannot be accessed without the help of a guide as the maze like formation may make one feel  dis -oriented. The width of the narrow rock- cut staircase is just about 21/2 feet. Lack of air, the dark interiors , frequent twist and turns in the steep staircase without railings does create panic. At times one has to bend double as the ceiling is too low. At one point it was just a hole through which we had crawl to get on to the terrace.

On  the 2 nd  floor is the sannidhi of the Upendra Narayana with his consorts and here the Lord is in a standing position . There are beautiful murals on the walls of this temple and it is believed to be one thousand years old . Above this sanctum is another sannidhi of Paravasudevan with his consorts (All different names of Vishnu)  . From the terrace of the Vimanam  we  could see the house of  Sri Tirukoshtiyur Nambigal who was the Guru of  Ramanujana, God's devotee and a great Vaishnava saint. It is believed that Ramanujam gave the Mantropadesham of Om Namo Narayana to all his disciples from this place. It is also said that from the top of the vimanam one could also watch the Meenakshi Kovil's tower at Madurai which is 70 Kms. away.

Facing the west we could see two huge idols of Narasimha Moorthy fighting Hiranya Kashipu and tearing him by putting him on his lap ( photos included). The Vimanam is ashtanga vimanam. Similar Vimanams are in Madurai ,  Koodal azhagar temple and other one in Chengalpet near Chennai  .

The legend is that this was the place of Kadamba Maharshi's ashram and he was being tormented by Hiranya Kashipu.To find a solution to this, all the rishis and devas assembled in Goshti ( group ) and hence this place came to be known as Tiru Koshtiyur. Here only the Prahlada charithram and slaying of  Hirnyakashipu was planned. It is also believed that Vishnu gave the Anantha sayana darshanam to Lord Indra here and the Sowmaya Narayana Perumal who is also known as Madhavan was given to Kadamba Maharishi by Lord Indra.

How to reach-   Karaikudi is the nearest town which is 20-25 Kms. The nearest airport is at Madurai.Karaikudi is well connected with road and rail .

Accommodation: Good hotels are available in town of Karaikudi .
For other temples near Karaikudi click here 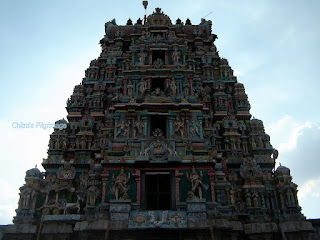 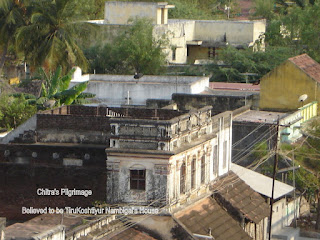 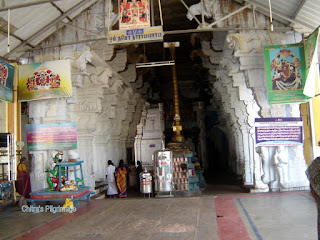 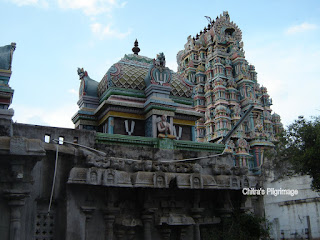 Very informative and complete as usual.

(PS:- I am back from vacation)

I would deem this as one of your best posts on temple sparing no details and creating a mental picture of the scene with your crisp writing.The one admirable feature in your posts is the longing you create in the minds of the readers to visit the temples you narrate on and derive the same pleasure and punyam as you have had.Thank you immensely,Chitra.

KP,
thank you so much. you really encourage me a lot. thanks for the support.This temple is unique and I need to do full justice when I write about it .

You climbed the tower of the temple? I'm so impressed. I love all your photos but find the one of Sri Ramanujam so appealing, sitting there surveying all that lies beneath.

Love this temple and the serenity there..Like you said, going up is a bit difficult without a guide but it is ultimate bliss to be standing at the same place where Sri Ramanuja has marked his presence.

One small correction..the house visible from up is not of Sri Ramanuja..it is of Thirukoshtiyur Nambi from whom Sri Ramanuja learnt the mantram..

PW, Yes it was great and an unforgettable one. As I moved up my head was reeling and wanted to retrace my steps but the guide would not allow me. So I made myself climb.I would have missed all if I had not ventured.

EC, thanks for the correction. Yes, it was Ramanuja who came to Tirukoshtiyur Nambi's place as a disciple. Shall make the changes.

Tower climing? I got reminded of the Besant Nagar Asthalakshmi Kovil. It should have been a nice experience.

what a coincidence! we were talking about this temple just yesterday, and today I get to see your post and pics!! wonderful!

Wow! That must have been one amazing experience! Wonderful description and I could almost imagine myself along!

Bindhu, been to Ashtalakshmi also. But cannot compare with that. It's totally a diff. experience.

that's nice Anu, sometime it just happens like that.

Arti, thank you so much.

Awesome place Chitra! Mysterious and ancient. Loved to see the pictures. Have a lovely weekend!

beautiful place as i said in the previous one I am amazed at the colors so many and so bright ...

Bikram, thank you so much.

I so much wanted to visit karaikudi this time and visit the nearby temples. unfortunately was short of time. will mark this temple,very well described by you, what a feeling it must have been to climb the gopura vimanam.

Wonderful chitra..! Been away for a while on Amarnath Yatra-trying to catch up with all the posts.

Asha,
yes, great feeling indeed. You must plan a visit to Karaikudi. i am off to that place again tomorrow.

sridharan, Welcome back. Waiting see your posts eagerly:) You are really blessed.

Love your narration on this temple. Brought back many memories and feelings. Thank you for sharing.

I'm still amazed at your photos and your post.

Martina, thank you so much.Hope you are enjoying your holiday.

The chair speaks,
thanks for the comment. happy you liked my narration.

Saw the flower vendors, next time do clock some of the flowers too. The temple as usual is very beautiful.

Oh...sure Mridula, shall do the same. I am sure you would love to see them.

such a great post I love the detailing! I'm your new follower hope you can follow me too :)

Oh my Dior, I am following you already.

The temple is unique and amazing. Very informative post with lovely description and pictures.

Reading your post I almost felt I was with you there walking the hallways and enjoying the divinity of the place.
US Masala

This is an amazing post. My sincere thanks to you and you know what, I will be visiting Thirukoshtiyur temple this weekend. It would be wonderful if you can also provide the temple timings. Once again my sincere thanks and wishes. Please continue this good work.