Arulmigu Mugudeshwar temple is situated in a serene village, on the banks of river Kaveri. This temple is famous as it houses the shrines of all the Trinities which  are very rare. The presiding deity here is Siva. Lord Mugudeshwar temple is a famous Sivasthalam or padal petra sthalam. The temple Lingam is believed to be a swaymbhu.  His consort  Parvati's shrine is on the left side of Shiva's temple. There are 3 medium sized towers here.

As we circumambulate we see a big Vanni tree with Lord Brahma's idol enshrined beneath it. The Vanni tree is the sthalavricksham ( holy tree) here and  Brahama here has only three heads, the fourth is considered as the vanni tree itself. The top half of the tree is considered as  Goddess Saraswathi,  His consort. Behind this tree, there is a small shrine for Veera Anjaneyar .

Mahalaksmi's temple  is on the right side of the  Vanni tree and Lord Vishnu's shrine is next to this. He is reclining here as Lord Ranganatha as in Sri Rangam. Only difference is that  He is lying on the serpent bed with 2 coils where as in Srirangam he is on a seven coil bed. Garuda, His mount is facing the  shrine. This shrine has a separate dwaja sthambha. On the North- east corner is the shrine for planet Saturn. The main mandapam in front of the Magudeshwar temple has dwaja and Nandi mandapam. There are beautiful carvings on the pillars of the temple.  The temple has a beautiful view with holy Kaveri flowing in front of the temple. Many bathe in this river as they feel it is invigorating.

Kodumudi is on Karur - Erode road.  A small diversion on the right side near the railway gate at  Kodumudi  will take one to this temple. From the main road this temple is about 1- 2 Kms.

How to reach- Well connected by road, rail and air. Trichy  is the nearest airport.
Accommodation : As there are no hotels around this place it is better to stay at Trichy/Karur .
Even for boarding  one may have to reach the nearest town Erode which 25 Kms away or Karur which is around 15 kms.
Many buses ply from Madurai  and Trichy to Kodumudi.
Temples nearby.
Sangameshawar temple at Bhavani which is about 40 Kms from Kodumudi  ( Dakshin Prayag) 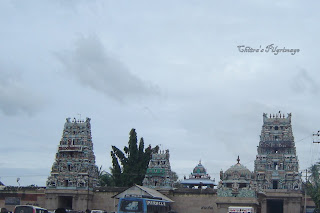 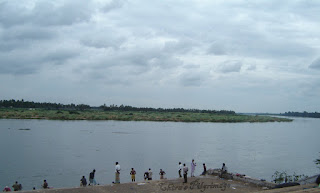 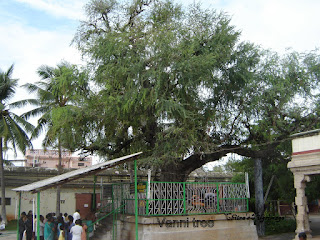 Lovely images and the water adds another beautiful dimension to it.

Very nice picture and good write up as usual. I never knew we have so many beautiful temples in India. Thanks for keep posting. You have so many articles and I do not believe you repeated a temple...

Mridula,
Thanks. The Kaveri is known as the Ganges of South.

A,
I have seen only a few. This is only from South Tamil Nadu, yet to see other places. Yes, haven't repeated so far as there won't be any interest in reading.

Many thanks for yet more wonderful images, I especially like the one taken outside of the Mugudeshwa​r. May I ask if the orange 'robes' covering the lower half of the mans body has a specific name?

Lovely clicks chitra, I simply adore ur blog cause every time I come I get to c some beautiful clicks of temple:)

Shrines of the Trinity under one roof is rare indeed. I love seeing the Kaveri with flowing water... Sight of a river with water flowing is a rare sight in Tamilnadu.. Nice images Chitra!

Team G square,
Thanks, I Just stood gazing at the kaveri for a long time.

PW, The orange robes are called Kashaya Vastra Or Kavi vastra meaning saffron used by people while visiting temples or performing any rituals. It is also worn by the saints of Hindu religion. It is believed that the attire itself will be constant reminder to the person that he is on a spiritual path.

Sushma, Happy you adore my blog. Thank you.

Sridharan, Yes, Trinities under roof is very rare and we have a very few temples where Lord Brahma is worshipped.

Wonderful temple... The Vanni tree looks very beautiful too, the architecture of the Southern temples is always a delight to watch!!
Glad to have you back:)

Beautiful!! this is one of the few temples i have not visited in this area :( i wanted to visit with my mom, but that didnt work out... she has spent quite a bit of time here, since she had some leg problems which were cured by a holy man here..

Trinity under one roof! Rare. Thanks again for the lovely writeup and pictures chitra

you are lucky to witness these temples. The images were good. felt as if I was watching the place through the narration.

Arti, I am slowly getting back to my normal schedule. Missed many posts.

Anu, Never knew there's a curing centre over there. I remember you mentioning that your mother has spent some days there.

Thanks you Abhilash, I had taken a break, yet to visit many blogs of my friends:)

Insignia, Thanks . I am sure you would written many posts. Shall visit you soon to read your wonderful posts.

You are a blessed lady fortunate to visit so many temples and have darshan of the gods and godesses.Purva janma punyam,I am sure.The good that you do in disseminating useful information and kindling people to visit the holy shrines would add to the good that you already have.
Nice post and nicer pictures.Thanks Chitra.

KP, Thanks for the wonderful comment. I loved it. Thanks.

Welcome back Chitra! Sometimes, i need a break to and hope you enjoyed yours! YOur new slide show is very pretty - as always. What an awesome temple!

Martina, Thanks you so much. Very happy to see you here and to know that you liked the slide show.

Would love to visit this beautiful temple! Thanks for giving such a detailed write up!

Nice Photos... but, what is venni tree?

SKM
Vanni tree is the name of the tree in Tamil which considered to be sacred as Agni resided in it for sometime. It is also used in preparing Ayurvedic medicines.

Chitra,
Thanks for this post. I have been so engrossed with the historic global news that have not done much else. So, I didn't realise you wrote a new post in the meantime.

This temple, as many temples of Tamil Nadu, seems to have many layers of chronology. The lion bracket pillars are reminiscent of the Pallava times, while the Karttikeya sculpture seems to be from the Nayaka period. Tree worship could of course be the initial starting point of this shrine in remote antiquity, which was gradually surrounded by other images and temples. There is of course a Chola layer in between. So this is an important temple which seems to have been continuously occupied and worshipped since very ancient times.

I need a picture from you. A picture of a temple. It is from Kapaleeshwarar temple - picture no.1. I want to publish on my next post for a reason. Can you please email me this picture.

Please do put your watermark on it and I will mention I got it from you.

I will appreciate it and hope it is okay with you.

My email address is arealblogger@gmail.com

Have a nice weekend
hugs from us all :-)

A,
Done, shall mail you.ASAP

Anya, When you are planning let me know. I will be most happy to take you around.

Loved the last snapshot and the pillar with the 'deer' relief.

?
thank you so much.

planning to visit this place this month end can you suggest some nice lodging near the temple...also the route to this place as I'll be travelling from Bangalore

you can send me more info to my e-mail: vikramvishnu@yahoo.co.in

This kind of temples should be well maintained and taken care by the govt of the states responsible for so that our next generation will know about this. Otherwise,everybody will know only about major temples like Tirumala,Madurai,Varanasi etc.
Anyhow,Chitra,you have done a good job.Keep posting these kind of information.
I request everyone should start something like this and explore the temples and sacred places that you know or in and around the place where you have grown.

Vamsikiran.
thanks a lot.what you say is right.