Nestled in a tiny and remote village of Gokarna, is the famous Mahabaleshwara temple which enshrines the Atmalingam which Ravana acquired from Kailash. Gokarana is in Northern Karnataka and one would find a number of idyllic beaches around the temple . The beach very near to the temple resembles Cow's (Go) ears (karna) hence the name for this place is Gokarna.Cows are worshipped here and they move freely inside and outside the temple. The temple is 1500 years old. It is also one of the mukti sthalas in Karnataka dedicated to Lord Siva.
There is a huge Ganesha idol here, outside the main temple of Mahabaleshwara. The idol has a deep cut on the forhead. The legend of the temple is similar to the one I have narrated earlier like the Vinayagar at Rock fort temple,Trichy. Here also it is believed that Ravana , instead of Vibeeshana in the other story ,wanted to take the idol of Siva to his kingdom . As the Gods wanted to prevent it ,Ganesha came in the form of a small boy and when Ravana wanted to perform his evening prayers, he handed it over to Ganesha instructing him not to keep it on the ground but hold it in his hands. Ganesha, who was there on a mission duly kept it on the ground and the Sivalinga got rooted to that place.When Ravana returned he was furious and hit Ganesha, a cut appeared on His forehead. It is still visible even today
The Sivalinga here remains concealed in the ground and devotees are allowed to worship the Sivalinga and one can feel the tip of the Lingam by one's hand and offer worship. Once in 40 years only the Sivalingam gets exposed when the Kumbabhishekam is performed.The Amman has a separate sannidhi inside the main temple.
Here one could see the tribal women selling flowers for worship and I really got fascinated by their costume known as ghetti and I could also see some magnificent craft work made of palm fibre. The last two pictures depict this. 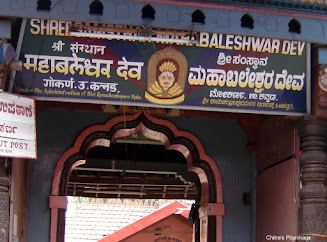 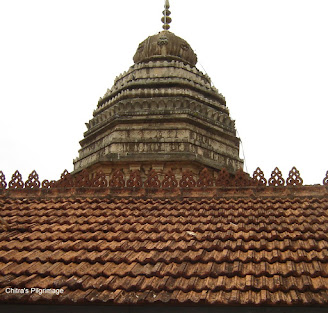 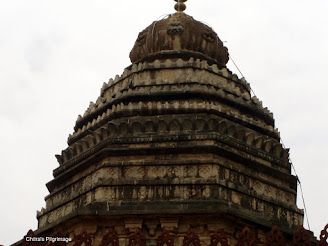 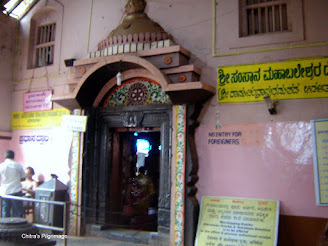 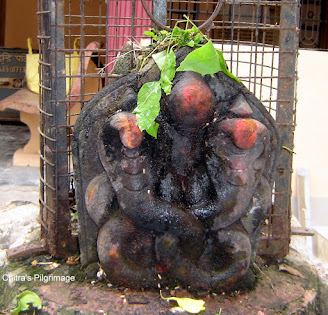 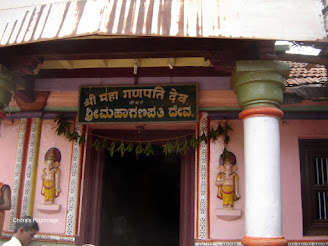 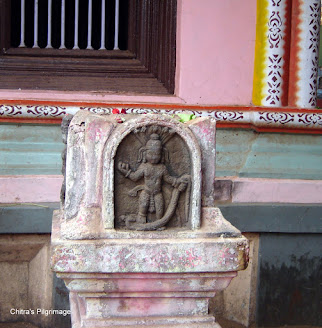 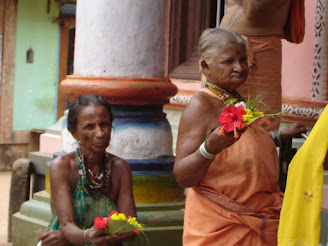 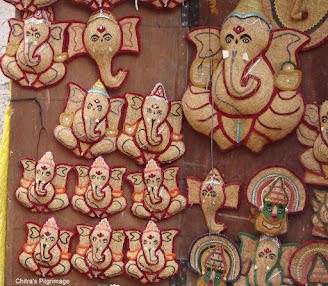 The Ganesha photos and the roof shot are mesmerizing.

Thanks for the wonderful description of this temple.

I have a question. Is there any connection between this and Thirugokarnam in Tamilnadu?

Fantastic description of this temple in Mahabaleshwar. Amazing Ganesh picture.

Hi chitra, happy janmasthami to you and your family...

Gokarna is scenic and clean. I went there last year when there was flood. Oh my!! even though it was constantly raining, we didnt mind even a single bit as the place was so exotic.

The pictures are amazing as usual.

hi chitra ,
i never knew about the story behind this lingam ...beautiful ..thanks for sharing

I loved the pictures Chitra...another 'must-visit' added to the list.

Mridula,
Thanks. The handicraft was so beautiful, i decided to add it here.

Ramesh,
There's nothing great about this ma dear friend. It's only about what I see and what I hear.

SG
Only names are similar.Nothing else. I shall write about it later.

Sushma,
Thanks for the greetings and comment.We have unscheduled and scheduled power cuts so i find it difficult to spend time at pc.
Let me also wish you Happy Janmashtami.

Insignia,
Good,you found time to connect with people you know even though you are away .Happy to know you have visited Gokarna also.

I love those palm ganeshas. Can I ask if people buy them to take home or leave them as offerings?

PW,
They are all show pieces. It's all craft work one can carry home. They are not for offerings..

you know what i am going to say .. i say that everytime i visit a new article from you.. Think about it

the crafted ganesha wow, can we buy them online somewhere to get them out here in uk.. I would really like to have them they look pretty

The pics of Lord Ganesh are so beautiful... The temple looks magnificient and after reading your description, I feel like visiting it!! At first, as I read the title, I thought it was about some temple in Mahabaleshwar.. Happy Janmasthami Chitra.

Bikram,
I know what you would say. So thank you and special thanks for visiting both my posts, real friend you are!!! .
About Ganesha- I am not sure Bikram whether they are available online. They are damn cheap here.I shall let you know if I have any information.

Arti,
Happy Janmashtami wishes to you also.
I am happy you liked my narration.

I love the story of the scar on Ganesha's head!
:-)
Traci

Love your narratives and your photos! Such colors in your culture!

Tracy, thanks.
Betty, Thanks

The way you describe each temple makes it so interesting and real, great work! Yes, I've heard of the temple but not visited. I am inspired to visit many temples now because you've described them so well.

Sanand,
Thanks you so much. I am happy you find my post interesting.

Again a great blog on an important pilgrimage place. Very good information, as also the photos.

Gorgeous and beautiful photos of Ganesha. Lovely description about Mahabaleshwar temple. Your each and every post is brilliant and informative.

Yaar Chitra how u manage to go temples at such a high frequency? Amazing!

Babli,
Thanks a ton for the encouraging words.

Monu,
Thanks dear :). travel,interest in seeing new places takes us to new places.

Ganesha photos are awesome and your description too.

Hi Chitra,
Sorry, I have been away from blogs for quite some time. Hopefully will be more regular.

Gokarna is an ancient pilgrimage centre mentioned in many Sanskrit texts. But this temple seems to be a renovated one. The Shikhara is the oldest part of the temple, which seems to date from 8th-9th century. Other structures are definitely much later.

It seems the original shrine was a mud-brick structure, which was taken up for renovation later.

Apart from the Ravana story, there is another legend which says Shiva emerged from the ear of a cow here, hence, Gokarna.
Thanks for this post!

Santosh,
Welcome,thanks for the visit. shall visit your site soon.

Archana,
Nice to see you.Was wondering about your long absence. I am sure you will be also blogging soon. Thanks for the additional information. Always feel good to learn something from you.

I am always amazed by your knowledge and memory.

Jayaraj,
Longtime,are you not writing anything these days?.

Thanks for the explanation.