Sangameshwara (Siva) temple is in Bhavani , 16 Kms from Erode railway station.  This temple is known as Dakshin Prayag as river Kaveri meets river Bhavani here. The confluence of these rivers along with river Amuda which is believed to be flowing underneath makes it a holy place and one can see constant stream of pilgrims in the bathing ghat here at the sangamam  ( hence the Lord here known as Sangameshawarar)  performing various rituals on its banks. It is believed that a bath at the sangamam purifies the mind as well as the body.

The temple of Sangameshwara is  very attractive as it is a store house of excellent craftsmanship.  One may wonder about the  kind of work that would have gone into making ordinary granite slabs  into magnificent ones.

Lord Sangameshwara is enshrined here facing the Kaveri. As we circumambulate there are subshrines for Vinayaga, Dakshina Moorthy, Muruga, Vishnu, Durga and Nataraja. All 63  Nayanmars also find a special place inside the temple. Amman  here is Veda Nayagi, a powerful deity and Her idol is also well decked in finery. The mandapam leading to her sannidhi has lot of ornamental work on pillars and ceiling.

Saneeshwarar shrine is on the left of Amman sannidhi and next to it is the shrine of Jeeraheshwarar, which I have seen  only in Tayumanavar temple at Rock fort temple, Trichy. There are also  shrines here for Venkatachalapathi ( Vishnu), Shenbagavalli thayar ( Mahalakshmi) and Venugopal  (Krishna).

There is a peepul tree on the banks of the rivers and there are many  Nagas and Vinayagar under it.  Pilgrims offer their worship here after a bath in the river before proceeding to the main temple of Sangameshwara.

Nearest town is Bhavani near Erode. Plenty of buses ply to this town from Erode and neighbouring towns.

Nearest airport is Trichy/Coimbatore. Erode is the nearest rail station.
Accomodation:   Erode is a small town and one may find only budget hotels here.
Nearby temples
Temple of Magudeshwarar or Trimurti temple at Kodumudi 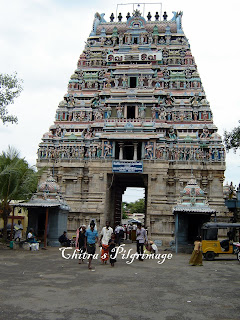 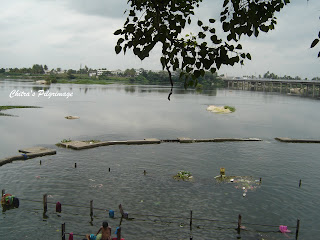 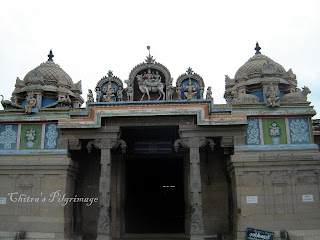 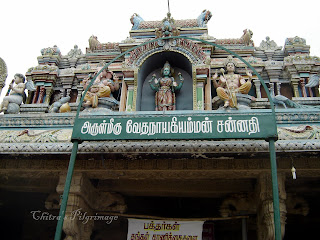 I visited this temple a long time ago, before I began writing, so unfortunately have no pics... i keep telling my husband that we should go back to these places, but then there are so many more places i want to see that i am not able to visit these wonderful places again. incidentally, am going to tiruppur in may... where will u be then?

The details on the wall are so pretty. And the water body looks lovely too.

Beautiful....both the photos and the write up..Chitra..! It is good to see some greeneries inside the temple and water in the river..!

The temple looks divine in the pics..would love to visit it sometime

Anu, Even I have seen many temples prior to my entry into blog sphere and do not have photos. But cannot go to those places again due practical difficulties.

I should be in Dindigul in May. No plans yet for travel.

Mridula, That vast stretch was river was really attractive which is a rare thing in Tamil Nadu.

Sushma, Thanks for the appreciation.

Sridharan, It's Kaveri and a perennial river. the temple atmosphere was really enchanting and surroundings were clean too.

I have been to Erode but somehow missed going to this temple. The sculptures in the photographs are from the Nayaka period (post-Chola), though the temple may be older.

hey nice posts , one more temple added to visit . Hope this year also i get a trip to Tamil Nadu may be upto Rameshwaram .(last year it was Kanyakumari)

I really appreciate you sharing these pictures. Gives me the glimpse me of our history n our culture..Nice writeup too..

It's an awesome read. Thanks for posting.

Archana, Even I came to know about it recently though I am just 130 Kms away from this place.

Team G Square.
Hope you make a trip down this route and every town you would find a temple.

Thanks Aipi, I am happy you like the posts with pictures.

Sanand,
I hardly see you these days. I know you are busy with your work. All the best .

Dear Chitra,
Good Morning!
I am happy that you published this post on Shivaratri!
Beautiful ambience!Is that a river?Looks so nice!I must say,the greens have added beauty to the premises!
Lovely photos!
Wishing you a beautiful day ahead,
Sasneham,
Anu

Beautiful post Chitra. Loved the pics, the sculpture is great in the temples and you have captured them beautifully...
Have a wonderful weekend :)

A,
Thanks for the comment.
Anu, thanks.It never struck I was publishing that on shivarathri day.
thanks Arti, I know you have a liking for these things. Enjoy your weekend too.

The scope of these pictures is amazing, thanks for another wonderful journey.

PW, thanks my dear friend.

Wow, such a beautiful and impressive place! I love these stone-carvings, so delicately done. Must be a pleasure to walk around therer and take photos and take it all in. Thanks for posting Chitra!

never heard of this temple before. Nice pictures Chitra.

Am reading about this beautiful place from your post Chitra; tempts one to visit and fairly near to Palakkad too!:-)

Both write ups and the photos are very beautiful. Wonderful post.

Hi
chitra nice photograpy... I hav got good information from your post... which is the best time to visit this place? will the temple be as free as shown in the pics?
thanks
Nalini