Tomorrow  is  Hanuman Jayanthi and I thought it is appropriate that my next post should be on Hanuman and hence this post of the Chinnalapatti Hanuman temple.

Sri Viswarupa Anjali Varatha Anjaneyar temple is situated in the quaint little village of Chinnalapatti which is 15 Kms from the the town of Dindigul. The temple here is small, a pretty neat structure but the idol of Anjaneyar here is huge, about 16 feet in height  made of Saligrama stone. One can view the idol right from the entrance of the temple. The Lord here stands with His hands folded and  with his mace -'Gadha'  resting on his legs. His eyes are like dark marbles which sparkle and gives a feeling as if he is looking at his devotees wherever they stand.

He is always adorned with beautiful costumes and  priests here who do the alankara(decorations) need a special mention as it is not easy to decorate a huge idol. He appears magnifcient in his various alankaras made of butter, fruits, sweet jalebis, and vadas. Offering Vada mala, a garland made of vadas  (a south Indian snack made of black gram ) numbering 108-1008 is  very  famous here . He is also bedecked with silk robes and jewellery like a king, known as Rajalankara. When He becomes Maruti he is adorned with green costume. These various alankaras are really a visual treat. The temple becomes a beehive of activity on Saturdays.

The most attractive thing here is photography is allowed even inside the sanctum.

This is considered to be one of the  six abodes of Anajaneyar where chunks of the Sanjeevani hill fell during the great Ramayana war when the Anjayear returned  with the Sanjeevani hill to revive the unconscious Lakshmana. There are about 5 more places considered equally holy , the others are at Suchindram, Namakkal, Nanganallur in Chennai , Deivaseyalpuram and Nugarveliya in Rampoda, Sri Lanka .

Chinnalapatti town is famous for handloom weaving and Chinnalapatii silk is a speciality of this place . Unfortunately this variety of silk is losing charm and is almost extinct now a days.

How to reach- Nearest rail station is at Dindigul Chinalapatti town is 15 Kms. from Dindigul. There are many buses plying from the town of Dindigul.
My google photos.
https://photos.google.com/album/AF1QipMEy8rtW1L1GnKH-c72LVfVxDmoAm-wBEU8uBOf 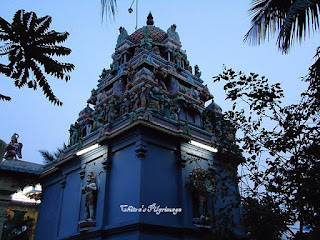 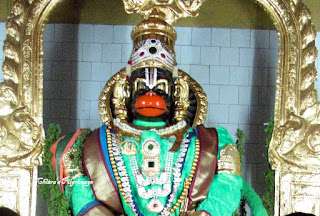 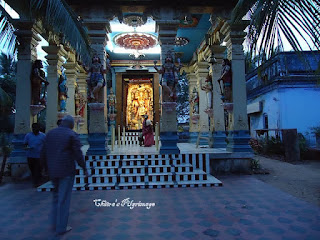 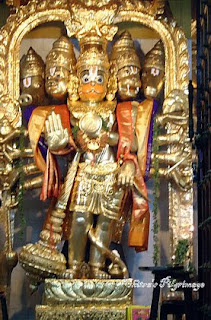 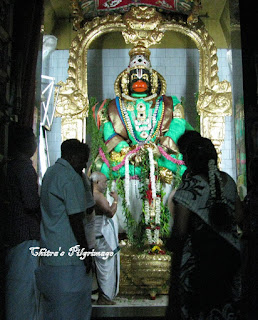 Kartikai masam  as per the Tamil calender is from mid November  - mid December and this month is considered to be very auspicious for devotees of Siva, Ayappa and Lord Muruga.

I have been waiting for an opportunity to write on Lord Muruga, also known by many other names as Shanmugha, Vadivela, Dhandayudhapani, Karthikeya, Skanda,Subramanya  and many more . There are six important abodes of Lord Muruga known as Arupadai veedu which I would be posting here one by one. But this present temple set among the majestic hills of Marudhamalai is also considered at par with the other six abodes of Lord Muruga.  Interestingly most of the temples of Muruga is found on small mounts or hillocks.

This magnificent temple  is at a distance of 12 Kms. from the town of Coimbatore,  The renovation was under progress when I visited  the temple and a flight of steps leads one to this temple. The hills around are  believed to have medicinal herbs and one does get refreshed by breathing the fresh air here. There is a cave temple here at  level lower than the main shrine and there is also a shrine here for Vinayagar .

The idol is radiant and a glimpse of this resplendent image of Lord soothes the mind. There are sacred  springs considered to have medicinal properties. Please just see the images which I could capture . I think those pictures itself would calm your mind too.


Other Murugan temple on 'My pilgrimage'- Mittai Murugan.

Find here  the link to Arunachaleshwar temple - Tiruvannamalai which is also celebrating Karthikai festival. The Kartikai deepam lit  atop the Tiruvannamali hill is famous and lakhs of devotees flock here on that day which happens to fall on December 8 th this year.


Howto reach
Maruthamali is situated in the industrial town of Coimbatore . This town is like a mini metro and is well connected with various cities by rail, road and air.
Accomrmodation facilities are excellent in the town . The famous hill station Ooty is only a 100 odd kilometres ride from this town. 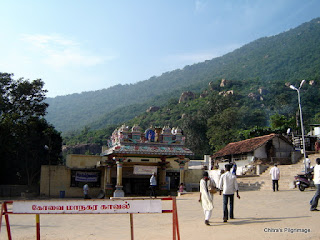 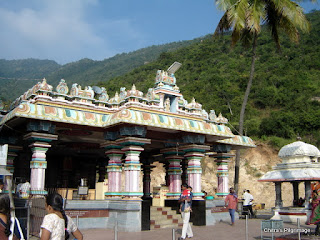 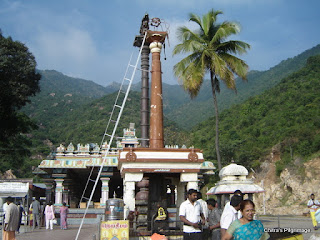 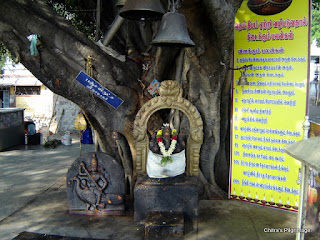 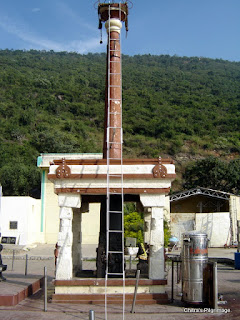