Uthamar Koil  is one among the 108 divyadesams of Vishnu. This temple is unique as this temple houses  all the Trinities- Vishnu, Siva and Brahma . Brahma has very few temples in India and this is an added attraction for this temple.  Here we find a blend of Vaishavisam and Saivism.
The temple is very simple and does not have huge towers like other temples. Facing east is the temple of Purushothaman (Vishnu) . Here he is in Sayana Kolam , meaning- reclining on Aadisesha. The Panchaloha idol of Purushothaman and his consort Poorna Valli Thayar are stunning.  Garudalwar is facing the Vishnu's shrine.Outside there are separate shrines for Mahalakshmi and Poornavalli Thayar.
Facing South is the shrine for Dakshina Moorthy and on the  West side is the temple of  Siva known here as Bhikshadaneshwar and his consort is known as Soundarya Parvati . She has a separate sannidhi inside this temple. At the entrance of this temple there is a  niche for Gnana Guru and Nandi is facing the Siva sannidhi. There are separte shrines for Krishna, Varadaraja, and Azhwars and Chakrathazhwar.
The legend goes like this- Siva removed one of Brahma's head in a fit of anger and he incurred a curse. To get salvation Siva went around the world with Brahma's skull to beg for food, hence the name Bhikshadaneshwar. Whenever some one filled his vessel with food it disappeared  and he remained hungry. Finally he  reached Uthamar koil and  Mahalakshmi filled it with food thus ending Siva's hunger.
At the Northen side is the shrine of Brahma and next to it is his consort Gnana Saraswati, the Goddess of Knowledge. Brahma grants here all the wishes of his devotees as Vishnu directed him to do so. Childless couples offer their prayers at this temple to beget offspring.
It is also believed that once Vishnu wanted to test Brahma and  He  hid in a Kadambha tree. Brahma was worried and started searching and found the Lord here in the form of a  Kadamba tree and worshipped him . Perumal blessed him by giving Him the privilege as the creator of all lives. Lord Brahma stayed here blessing his devotees.
How to reach: This temple is in Srirangam and is 5 Kms from Trichy town. Trichy is well connected by rail, road and air.
Regular buses ply  with good frequency to Srirangam.
One can also hire auto rickshaw or cabs.
Accommodation - A number  of hotels are available in luxury , economy and budget category. 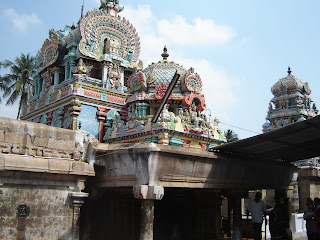 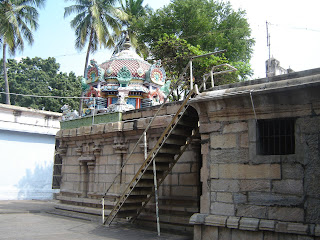 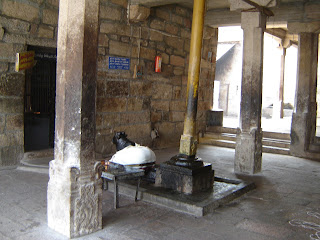 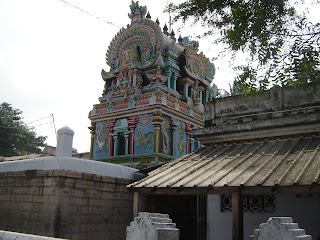 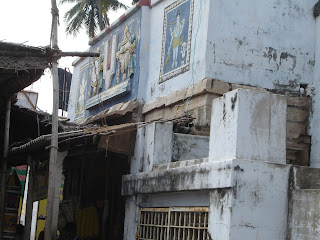 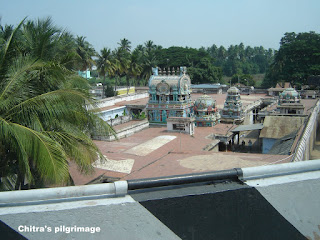 Aerial View of the temple
Posted by chitra at 10:53 PM 66 comments: 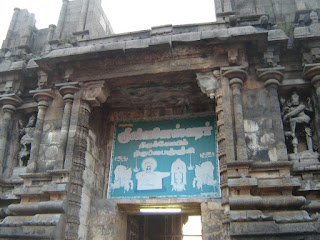 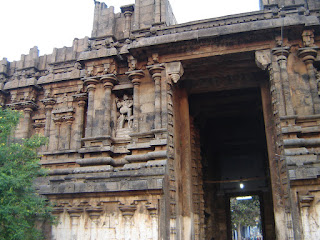 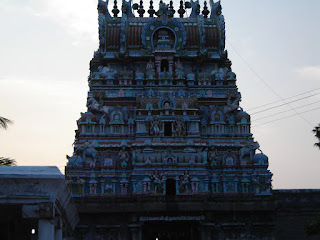 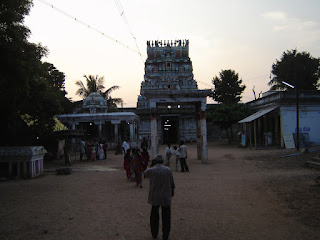 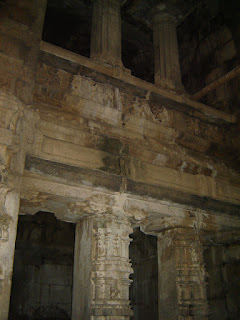 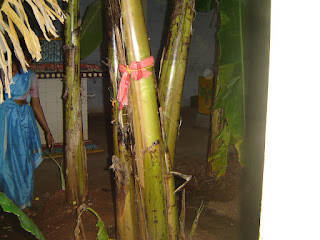 The Sthala Vricksham
Posted by chitra at 8:10 PM 47 comments:

Chotttaikkara Bhagavathi temple is a very famous and ancient temple in Ernakulam district. It is situated 15 Kms. from Erankulam(Kochi). Bhagavathi is the synonym for Amman. There are two temples here, one for Chottanikkara Amma and other one for Keezhkavilamma which is at a lower elevation .One has to descend few steps to reach this temple.
The Goddess here is very powerful and Chottanikkara Bhagavathy is worshipped as Saraswati (Goddess of learning) early in the morning, Lakshmi (Goddess of wealth) in the noon and as Durga (Goddess of power) in the evening. The deity is adorned with white sari when she is worshipped as Saraswathi and for the other two worships, She is decked up with colourful silks and ornaments. The main idol here is a Swayambhu and does not have a regular shape. What is generally visible is the deity adorned with golden kavacham with conch and discus in her hands.There is also an image of Vishnu inside the sanctum hence people refer to the Goddess here as Amme Narayana Badre Narayana.
Keezhkavu temple (the temple at the lower elevation) , the deity is Bhadrakali , another form of Mother Goddess and it is believed that a worship here for a period of 41 days removes mental ailments and rids one of evil spirits. Even now we come across mentally deranged people praying here. There is a tree inside this temple with hundreds of nails driven into it as a mark of devotees being exorcised here. See the last two photos with nails driven into the tree. Navarathri and Magam thozhal are two famous festivals here. Another interesting sight here is devotees offering vedi vazhipadu ( bursting of fire crackers called Kadina).
There are sub shrines for Sastha (Ayyappa), Siva, Nagas and Ganesha. The temple attracts a lot of devotees on Tuesdays and Fridays.
How to reach: Chottanikkara is just 15 Kms. from Kochi ( Ernakulam railway station.)
Excellent transport facilities are available as number of private buses ply on this route.
The nearest airport is Nedumbassery ( Kochi international airport)
Accommodation - Visitors are advised to stay in Kochi where excellent hotels are available of all ranges.