I thought a short break from Tamil Nadu would be good though I have lined up a few temples to post about. My recent trip to Kerala was an unforgettable one, especially as I landed there on a festival day .Temples in Kerala are simple unlike Tamil Nadu temples which is famous for its carvings and sculptures. In Kerala The dwaja sthambha and deepa sthambha are given lot of importance. The height of the dwaja or flag post also depends on how powerful the deity is. The idols in Kerala temples are smaller in size compared to the ones in Tamil Nadu. Sanctity of the temples are maintained well and most of the temples do follow a dress code.
This time I am taking you to Lord Ayyapa's temple situated at Tamarakulangara in Tripunithura which is just an extension of Kochi town itself . I have already written a post on Poornathrayesa temple belonging to the same place. Lord Ayappa, is the son of Siva and Vishnu when the latter assumed the form of Mohini to retrieve the Amrita Kumbha from Asuras.
November-April is the festival season and I thought I would take you through one which I have seen recently. Elephants are indispensable for festivals here and the deity is carried atop the caparisoned elephants with the accompaniments of colorful parasols, Peacock feather fans, called Aalvattom and Venchamaram made of fur from yak tails. Pandi Melam is an orchestra of percussion instruments, trumpet and Cymbals which adds the necessary rhythm and charm to the elephant procession. This procession is called Seeveli. It is really a fantastic spectacle. People sway to the rhythm of the percussion instruments and the Seeveli lasts about 2-3 hours. The festival ends with colourful display of fireworks and a feast subsequently to all the devotees. Kadina is a traditional fire cracker which is used during the worship. A series of Kadinas are used during the worship during the festival. See the photos of Kadina . Para Nirakkal is another custom followed in the temples. The devotees offer paddy, sugar, jaggery, or flaked rice to the deity and for this a special vessel resembling a measure known as Para is kept in front of the deity and the devotees fill it with their offerings.
Enjoy the festival.
Picture 1, 2, 3 The temple decorations 4 &5 Seeveli, 6 deity atop the elephant,7,8,9 Paddy and puffed padyy and para nirakkal 10 seeveli, 11 flags,indicating festival, 12. Kadina, 13 dwajasthambham, flag hoisted.

Trichy is an important town in Tamil nadu and is situated on the banks of river Kaveri. Like any other Tamil Nadu towns, this town also abounds in temples and the famous land mark of this region is the famous Rock fort temple which you would be coming across in one of my posts soon. Trichy is around 100 miles from Madurai.This time I am taking you to an ancient temple and I was awe struck when I saw this temple. Each temple has some thing unique and here also I found something which was interesting and amazing,.read on.....

This temple dates back to a period older than Ramayana and is situated about 17 kms. from Trichy town and is one among the 108 divya deshams of Vishnu.

Tiruvellarai means white rock and this temple is situated on a white granite hill which is 100 feet high . The deity in this temple is known Pundareekaksha Perumal. In Tamil it means Chendamarai Kannan and its English translation would be God with Lotus Shaped eyes. The temple has a main tower , which is in an unfinished state, nevertheless looks grand and I would say it adds certain charm to the temple.This temple is surrounded by a 36 feet high wall and resembles a fort . The second tower leads us inside the temple and we were wonder struck by the colourful huge sculptures on the wall which were painted in bright shining colours.The Bali peetam here is a huge one and the third tower leads us into the inner prakaram of the temple. Here also, like the Varadarajar temple in Kanchi we have to climb a fleet of steps to reach the sanctum.There are two dwaras (doors) leading to this sanctum . One is called as Dakshinayana dwaram and the other is Uttarayana dwaram. The dakshinaya dwaram remains open from Aadi to Marghazi ( August to Jan Mid) so we entered through the Dakshinayan door . The other door remains open from ( Mid January- July) Thai -Aani. This is in accordance with the movement of the Sun's path.

The main deity is around 12 feet in height and has Sun and Moon on either side of the deity offering their services to him. Then Garuda and Adisesha ( The serpent God in a human form, as the main deity is in a standing posture) are also near the main deity. Markendeya Maharshi and Boodevi are sitting near His feet and is believed to have prayed here at this place. The Utsavar is also a beautiful idol along with his consort beside him . The female deity is the custodian of the temple.

The temple maintains beautiful garden outside and it is famous for its Swastika shaped tank on the Northen side of the temple. I was wonder struck by seeing this . This shape it seems is to give privacy for people, while having bath. But there is no water at present as some renovation work is in progress. This is also under the care of Archaeological Survey of India. There are many inscriptions in the temple and it also mentions about this unique pond which was built by one feudal Lord under Pallava kings. The temple gets very few pilgrims . The temple precincts are kept neat and clean.Outside prakaram has the Thayar Senkamala Valli , and Chakra Thazhwar sannidhi. It was really a great experience, felt as if travelled thousands of years back into a bygone era.

The temple was built by the Emperor Sibi who is supposed to belong to a generation four times earlier to that of Rama. The legend is that Emperor Sibi found a white boar and started chasing it and it hid into an ant hill. Markendeya Muni who was doing penance nearby asked the king to pour milk over the ant hill and discovered a huge idol of the Lord. The Pallava Kings and Hoysala kings have contributed a lot in the reconstruction of the temple.

How to reach- Trichy is well connected with rail, air and road. To reach the temple it is better to hire a cab as frequency of buses to Tiruvellarai is quite low. This temple is on the Trichy- Thuraiyur route.

Kala Megha Perumal temple in Thiru Moghur is the 46th divya desham of Vishnu. The temple recently got a face lift and looks fresh and brightly painted. The main idol of Vishnu is huge and is flanked by his His consorts Boodevi and Sreedevi.
Moghur comes from Mohini, the beautiful female form of Lord Vishnu who had taken this form to save the nectar from the Asuras. The Utsavar here is worshipped here in that form and the Lord is also referred to as Kala Megham , meaning dark clouds. Like dark clouds shower rains, the Lord here showers blessings on his devotees. Here the deity is like the Varadaraja of Kanchipuram and is holding a mace in his left hand and with his right blesses his devotees. There are separate shrines for Mohanavalli Thayar , Andal and Navaneetha Krishnan.
The Sudarshana Chakra occupies a significant place here and this shrine is behind the Thayar sannidhi and the vimanam atop is gold plated. The Sudharshana idol here is special with sixteen hands, holding 16 different weapons and is believed that he is moving forward to help his bhaktas (devotees) The Sudarshana image has the Lord Narasimha Moorthy on the back side in a yogic posture and same can be seen on the Utsavar here. Devotees offer their worship to the Utsavar of Chakra thazhwar which is kept in front of the Thayar sannidhi.
The Vimanam of the main temple is round in shape and is called Ketaki Vimanam. This temple also has beautiful carvings. The dwaja sthambam is in the outer most prakkaram and there is a huge mandapam and a shrine dedicated to Adi Sayana perumal. The deity here is reclining on Adisesha and Goddesses are sitting near his foot and praying to him. One has to first offer the worship here before proceeding to offer prayers to Kala Megha Perumal. There is also a shrine for Anjaneyar here on the South side. There is a tank outside the temple .
This temple is 8 kms. from Madurai.and one may have to take buses to this village from Mattuthavani bus stand. 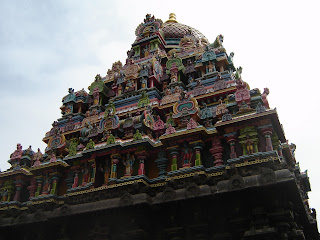 The Ketaki Vimanam of the main temple 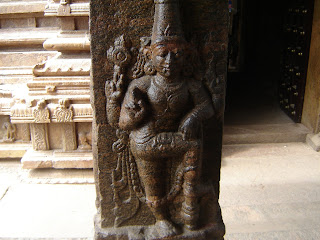 Carving on the pillar 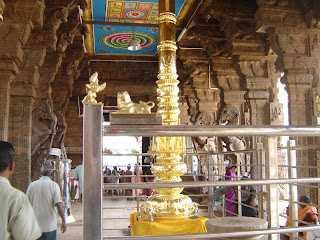 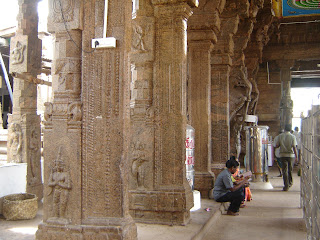 The Pillars with carvings 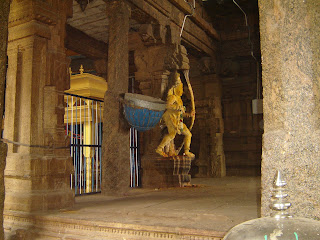 The God of Love ,Kama 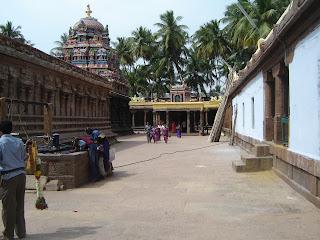 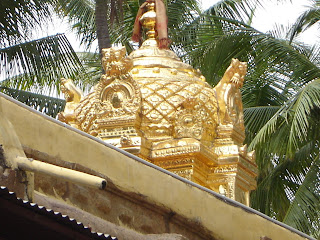 Some more photos of the temple, watch the slide show

Kallazhagar temple is situated 16 Kms from Madurai town and is one among the 108 divya deshams of Vishnu. He is also known as Meenakshi Amman's brother.The temple is located in a picturesque locale with Vrishabhadri hill forming the background for this temple. The sprawling area around the temple is fortified by a wall. There are 2 forts near the temple.The temple gate is guarded by the deity Karuppannasami.

The Moolavar ( main deity) in the temple is called as Kallazhagar . He is flanked by his consorts Boodevi and Sreedevi . The panchaloha idol is known as Soundara Raja Perumal , there are also idols of Azhwars in front of the main deity. Kalla Azhagar is considered to be the tutelary deity of the Kallar tribe of this region, hence the name Kallazhagar. Thayaar here is Sundaravalli. Garudalwar sannidhi is opposite to the main sannidhi and there are shrines for Saraswathi Nachiyar, Valapuri Vinayagar, Kannan and Yoga Narasimhar.

The Vimanam and the dwaja sthambham ( flag staff) are gold plated. There is a beautiful mandapam in front of the temple with fine carvings.The Noopura Ganga spring can be found at 4 Kms. up the hill. There is a shrine dedicated to Rakkayi Amman here. Below this is the spring which is believed to have originated from the Anklets of Vishnu.

Chithirai festival is famous here and is closely connected with the festival of Meenakshi Amman temple. During this festival Kallzhagar leaves the temple and spends 5 days on the river bank of Vaigai and returns.

How to reach: Frequent buses ply from the Madurai town to this temple.