This temple is situated 12 Kms. from the Tirunelveli town and the deity worshipped here is Venkatachalapathy along with his two consorts Bhoodevi and Sreedevi. As we cross the main tower and enter into precincts of the temple there is a Dhwaja sthambam and in front of that sits Garuda the vehicle of Lord Vishnu facing the deity. As we move towards the sanctum sanctorum there is a mandapam with life size images of Arjuna with a beard performing penance with bow and arrow in hand, Bheema and Karna and a half man and half beast called purusha mrigam. There is a story behind each sculpture and one can really spend time taking in the beauty of each one.

Court scenes are depicted beautifully in stone and the mandapam on Northern side of the temple is called the Veerappa Naicka mandapam. It has beautifully carved scenes from puranas. During the festival crowds from nearby villages flock to these temples other wise visit by tourists are very low. When we come out of the temple we can go clockwise for circumambulation and here we find the two sannadhis of Sree and Bhoodevi on either side of the main temple. The corridor in front of both the sannidhis are wonderful with beautiful figures sculpted on it .
Another architectural marvel worth mentioning is the scenes of a prince and princess being abducted by Kuravan and Kurathi (gypsies) and the king giving a hot pursuit. These figures are really poetry on stone, sculpted to perfection with smooth and shining appearance. It doesn’t appear that these are age old sculptures, as one feels they would breathe life any time. The princess is sitting on the shoulder of the Kuravan and the prince is carried by the Kurathi in a basket kept on her head. A lance piercing and the blood oozing from the wound of the gypsy by the charger are depicted by a gash and shade of red stone.


This temple is an architectural marvel and each sculpture looks fabulous and terrific. Even the ornaments and clothes engraved on the figurines are looking grand and awesome. But this temple can be given little more attention maintenance wise. This temple is a real heritage which needs to be preserved for its art as it holds a charm of its own.

Corridor in front of Sreedevi shrine 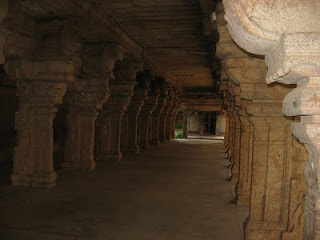 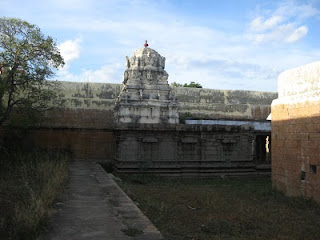 By air- Nearest airport- Madurai/ Tuticorin
Trains- Tirunelveli is well connected with all the metros.
By road-Cabs as well as regular bus service from Tiruneveli bus stand are available.
Accomodation- there are many hotels and restaurants available in Tirunelveli suiting to all sections of people.
Posted by chitra at 7:52 PM 4 comments:

I have spent nearly 2 years in Tirunelveli and it would be befitting if I write about the famous Nellaippar kovil which I used to visit regularly. This is situated in the heart of the town. This temple is really as old as Madurai Meenakshi Amman temple, or slightly older than that. This temple is hailed as one of the pancha sabhas of Nataraja other being Chidambaram, Madurai, Kuttralam and Tiruvalankadu. Nellaiyappar is also known as Venuavneswar and this temple is the 14th thevara sthalams in Pandya region of Tamilnadu.

This temple is vast, spread over acres of land and houses two temples of Nellaiyappar (Siva) and Kanthimati (Parvati) his consort. The towers of both these temples are huge and they are really attractive with colorful figures engraved on it. This is situated near the river Tamarabharani.
As we enter the Nellaiyappar’s Kovil a huge Nandi which is the vehicle of Siva welcomes us. This is the first prakaram once you enter the temple. Unlike other Nandis found mainly of black granite this one here is in white.

Then we enter the next prakaram where we see the Dwajasthambam (flag post) and we have to climb a flight of steps and there is a mandapam and we can see the musical pillars which resonates with the seven musical notes when one strikes the pillars with small piece of stone or wood. It is really a wonder how these musical pillars were carved out of a monolithic stone. These kinds of pillars are found in Meenakshi temple in Madurai and Suchidram Siva temple near Kanyakumari.

When we enter the next prakaram again there is a small Nandi and just before we enter to have the darshan of the main deity we can see the huge idol of Vinayaga. On either side of the entrance there are Dwarapalakars guarding the entrance. Nellaiyappar doesn’t look like a proper Siva lingam here as it has a different shape, slightly rectangular. There are guides to explain the history of the temple free of cost. Next to Nellaippar sannidhi is Nellai Govidharajar sannidhi, here one can find Vishnu in a reclining form on his serpent. It is believed that Vishnu visited this place to perform the wedding of Shiva and Kanthimati.

As we come out of the prakaram we can see shrines of Dakshinamurthy, Chandikeshwarar and Durgaiamman and Bairavar.

The Moolavar of Nellaiyappar is found in the basement and one has to get down a few steps to have a darshan of the same. This was the Lingam that was worshipped by the king before the proper temple was constructed. Coming out of this prakaram where the dwaja sthambam is located, when we go clock wise we can find all the 63 Nayanmars (saints) of Siva, Utsavar moorthy then Saptamathrukal,( seven God mothers) and Somaskandar. The Thamara sabha, the Copper Hall of Dance is constructed with exquisite wood work and here the Arudra darsanam festival(December15- January15) Of Lord Nataraja is conducted in the month of Marghazi. The Lord and his consort’s idols are housed here during that time and elaborate rituals are conducted for the cosmic dance festival of Nataraja. There are two Nataraja shrines here one is called Peria sabapathy and other Chandana sabhapathy, as the idol is always adorned with sandal wood paste hence appears white.

Then on the Northern side there are Sanishwara’s and Gajalakshmi’s shrines. As we near the Dwajasthambam we can see the shrine of Kubera Lingam. Once we get out of this prakaram one can proceed to the south side where Kanthimathi Amman temple is situated. These two temples are connected by a beautifully carved corridor Sangali mandapam with life size statues on either side. On the way to Amman sannidhi again we see a shrine of Dakshinamurthy and there are many Siva lingams. Kanthimati Amman’s idol here is considered to be a swayambhu and women flock to this temple and offer prayers to her by singing hymns. There is a separate Dwajasthamba here also and the one thousand pillared mandapam is certainly a good attraction for tourists. The temple tank is also attached to this temple.

Again when we come back to the main temple complex we find many shrines of Vinayaga, Subramaniya, Shankar and Gomathiamman, Vayu lingam etc. Just to go around this magnificent temple it would take about 2 hours. One can spend easily a day in the temple looking at various engravings and life size figures of people of yore.

The Sankar Narayanar Kovil is situated 50 kms. From Tirunelveli, or around 75Kms. from Madurai. The place takes its name from the temple and is called Sankaran Koil and is the second largest town in Tirunelveli District .This temple is 900 years old. Here the main deities are Siva, Sankar Narayan and Parvati. This temple wears a festive look during the month of Aadi (that falls In August) as Aadi Tapasu festival is famous here.

There are three different sannidhis (Three temples) in this temple complex. As we enter,the first sannidhi is that of Sankar and the second one is that of Shankarnarayan and third one is of Gomati (Parvati).
This is the place where Goddess Parvati, known here as Gomathi Amman had performed a penance to have the darshan of Vishnu and Siva in unison. She performed the tapasu in the month of Aadi which is an auspicious month for the south Indians. Both Vishnu and Siva appeared before her in unison called Shankar Narayan. The deity here is half Vishnu and half Siva and this can be easily distinguished by the costume that is adorned to the deity. One onside it is tiger skin cloth and ash on forehead representing Siva and on the other half it is white cloth and the Tirunamam which is typical of Vishnu.
Inside the Gomathi Amman temple there is a place where devotees can take Puttruman ( i.e. Holy sand of ant hill as a prasadam. The general belief is that the Holy Sand- "Puttruman" is capable of curing all the diseases. Devotees believe that Sankarankoil‘s Nagasunai (sacred tank) have been dug by serpent kings named PadumanSangam which has a miraculous power to heal those who bathe there. It is believed that all devotees who pray to the goddess Gomati Amman get her divine blessings . As it is festival time during the month of Aadi this temple gets crowded with pilgrims. and
This temple is held sacred by both vaishanavites and Saivites as it a fine example to depict that both Vishnu and Siva are same. Another legend associated with the temple is that once there was a quarrel between and Shaivites, the followers of Siva and Vaishanavites, the followers of Vishnu as to who is the greater god. To put all notions of people at rest to show that both Vishnu and Siva are same , both Gods appeared before their devotees in unison one half representing Siva and other half as Vishnu.
The Temple tower is huge and has beautiful engravings of mythological figures. Inside the Sankaran kovil there is a separate shrine for the Nagaraja and one can see many devotees lighting lamps and performing pal abhishekam (bathing with milk) for the serpent gods here. Then there are other shrines for Durga, Chandikeshwarar, and Vinayagar and Dakshinamoorthy.
Access
By air- nearest airport is Madurai.
By train- Major railway station is Tirunelveli, is well connected with trains from Chennai, and other Metros.
Nearest railway station is at Rajapalayam which is 25 kms. From Sankaran Kovil.
There is a train from Chennai (Podhigai express) to reach Rajapalayam.
By road- cabs are available from Tirunelveli and Rajapalayam and Madurai
Plenty of state transport buses are available and well connected with the nearby towns like Kovilpatti, Virudhunagar etc.
One can visit Kuttralam water falls (also known as Courtallam) tourist spot which is very famous on the way on Sankaran Kovil.
Posted by chitra at 8:12 AM 4 comments: